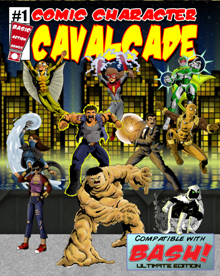 This will be a product featuring no less than 50 characters submitted by fans of the game. Each will receive their own full page write-up, in the style of an official BASH! Character. This will be a limited release, short print run. Only 50 Pre-order slots are available! So order yours before they run out!

Pre-Order and Submit Your Hero or Villain

Each pre-order will receive one slot in the Cavalcade, and one character submission form. So if you make three pre-orders, in any combination of packages, you receive three slots and can submit three characters.  There are three options to choose from in making your order.  To place your order, select your choice from the drop-down menu, then click the "Pay Now" button.

The Deluxe Cavalcade Package Gets You:

While we will do everything we can to accommodate your character submission if you pre-order; we may ask you to submit an alternate character for any of the following reasons:

We may ask you to make a couple changes, or we may ask that you submit a different character entirely For instance if a character just has a similar name to another, we may just want a name change. If it has all the same powers, we may need a different character. While we'll do anything we can to accommodate you, if we cannot, we'll get you a refund.

Here's what we'll need from you:

Here's what we'd also like to have if you can:

Regarding Future Publications and your Character

You have the option of allowing your character to be republished in future BASH! Publications, or to choose to keep the character out of any future publications. However, the artwork may still be re-used by Basic Action Games.

Shipping & Handling for Deluxe Package
The price is $20 US Dollars + Shipping and Handling.  The cost of S&H will be the actual shipping cost at the time that the books are ready to go out, with prices varying based on the destination.  At current prices, estimate around $7 for shipping to the US and Canada, around $15 for shipping to Europe or Austrailia.
When your order is ready to ship, we'll send you a payment request for the shipping amount.  Once that is received, your order will be shipped out to you.